‘Tis The Season to Be Silly at BCT!

By Tina Arth and Darrell Baker
Beaverton Civic Theatre’s 2013 season has taken its audiences on a wild ride from the sublime to the ridiculous. After the somberly enthralling production of The Crucible, this versatile troupe brings us If It’s Monday, This Must Be Christmas, a piece of holiday fluff that ends the year on a much lighter note.

﻿
Author Pat Cook began his prolific career as a playwright after being inspired by Neil Simon. While Cook’s script is often clever, Mr. Simon can rest easy – Cook’s work is no challenge to such classic comedies as The Odd Couple and Plaza Suite. Happily, by late November theater audiences are sometimes less interested in great writing than in silly comedy, which Cook delivers with a vengeance.

The story? Good heavens! The gift-wrapped payroll for Harrigan’s Department Store has disappeared, along with the store’s Santa Claus. Whodunit? Store employee Loretta Mondello calls in her son, private eye/dogwalker Harry Monday, whose bumbling detective style ultimately cracks the case (of the missing money – inexplicably, Santa never does turn up…). Along the way, mayhem ensues (two acts worth)!

The “bumbling detective” (who is really quite shrewd) is a stock mystery character. However, Harry Monday, as portrayed by John Ollis, defies the stereotype – lots of bumble, not much shrewd. Ollis frequently breaks the “fourth wall”, addressing the audience in a friendly but conspiratorial tone that keeps us on track with the show’s convoluted plot.


What passes for love interest in the show comes from the relationship between store employee Carson Page (Les Ico) and store owner’s daughter Penny Harrigan (Harmony Rutter).  These two young actors deliver some of the most natural and believable moments in the play. The other two younger performers also bring their best games. Kassy Williams does a great job of portraying Polly Brogan, a nagging little brat in search of Santa, and Riley Edwards (Harry Monday as a child) shows so much moxie that one wonders how he grew into the bumbling adult version of the character.

Patti Speight brings all the intensity of a ticking biological clock to the role of Scarlett Kloontz, and Patrick Brassell (store owner Titus Harrigan) is appropriately bombastic. Patricia Herkert creates a frenetically wide-eyed and perky elf who ranges from excitable to downright hysterical.

Director George Herkert has assembled a fine production team. The set, while simple, is attractive and appropriate, and the costumes capture the spirit of the characters. The huge opening-night crowd proved a bit distracting – many audience members were seated in portable chairs along the aisle with less than optimal sight lines, and the show began more than ½ hour late. Perhaps the time has come for BCT to reconsider their admirable “donate two books, get in for $5.00” opening night promotion – maybe by selecting a slower evening (or matinee) for this attractive deal.

Beaverton Civic Theatre’s production of If It’s Monday, This Must Be Christmas runs through Sunday, December 8th at the Beaverton City Library Auditorium, with 8:00 pm shows on Friday and Saturday and 2:00 pm matiness on Sunday.

A case of ‘Murder at the Orient Express’

This Beaverton whodunit turns the famous train into a Chinese restaurant 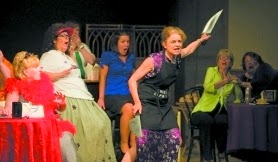 Two men meet at a Chinese restaurant, a wealthy millionaire and a private detective. The millionaire is worried that someone is trying to kill him. Suddenly the lights go out, there’s a scream, and the scene is set for another classic who-dunnit.
That’s the plot of Beaverton Neighborhood Association Committee’s latest summer theater production, currently playing at the Beaverton library.
The plot is based on the classic Agatha Christie tale “Murder on the Orient Express,” but with a bit of a twist.
“This is ‘Murder at the Orient Express,’ and the Orient Express is the name of a Chinese restaurant,” said Helena Greathouse through a thick Czech accent. Greathouse stars in the production as an eccentric waitress named Frau Beethoven, a rigid German woman who is not at all upset that the mysterious millionaire has just been murdered.
But don’t think that gives away the plot. As anyone familiar with Christie’s original novel will tell you, everyone on the Orient Express is hiding something.
“I don’t want to give it away, but she’s around all the time, and it comes to her in the last act,” Greathouse said.
The NAC summer program is a newer program put on by members of the Beaverton Civic Theatre, now in its second year.
The productions usually bring in actors who aren’t as experienced, Roder said, and that’s part of the fun of the production.
“It’s less intimidating for people than a show at the Civic Theatre,” said the show’s director Paul Roder, who also acts at the Beaverton Civic Theatre. “It makes for a good testing ground for people to see if they like (acting).”
Greathouse acted in NAC’s summer production last year and has already become a part of the summer theater family, Roder said.
“It’s funny, she’s become a staple of the summer for me,” Roder said. “She brings a different sensibility that a lot of actors don’t have, because she’s very strongly rooted in movement; she comes from that philosophy, and it provides a different take on her acting.”
That basis in movement comes from Greathouse’s career as a competitive gymnast, which she did until the 1970s, when she made the transition from performer to judge.
Greathouse was an international judge in rhythmic gymnastics for almost 30 years before moving to her home in Tigard’s Summerfield community in 2002.
Greathouse judged at two Olympic Games – Los Angeles in 1984 and Atlanta, Ga., in 1996 – and says that the art of movement is pivotal for her and her acting.
“I bring that movement into everything,” she said. “You must see what the character wants and what could fit for her so that it wouldn’t be out of line. Last year I played a fortune teller, and it was perfect for me, I could do a lot of movement with that. This time, as the Frau, she’s very stiff and I don’t get to do as much movement until later.”
Greathouse’s was perfect for the character of Frau, Roder said.
“She has all the qualities that Frau needs,” he said. “There’s a bit of eccentricity there, and Helena has such a unique air about her. It just fits the physicality of the character. And she’s funny! I don’t think she realizes just how funny she is sometimes.”
Despite what could be a serious subject matter, “Murder at the Orient Express” is a comedy for the whole family, Roder said.
“It’s a spoof, almost a parody,” he said. “It’s cartoonish almost. I’ve tried to take a lot of my favorite bits from Bugs Bunny and bring it to life.”
“Murder at the Orient Express” plays at the Beaverton City Library, 12375 S.W. Fifth St., for two more shows: Today (Thursday) at 7 p.m., and Saturday, July 24, at 2 p.m.
For more information about the show, contact the library at 503-644-2197.
Copyright 2010 Pamplin Media Group, 6605 S.E. Lake Road, Portland, OR 97222 • 503-226-6397

OTO's new opera cabaret group, the Cavalcade of Beautiful Losers, continues its first show, "Will Kill For Vaudeville," March 29 and April 10 at the Someday Lounge (8:00 pm, tickets $10 at the door). The evening, dedicated to the slightly shabby grandeur of end-era vaudeville, includes performances by Coney Island Cartel and Czech cabaret artiste Helena Greathouse.

The Cavalcade is a new OTO project to produce opera at bar venues, sharing a bill with local bands and performance artists. The shows, written by Artistic Director Katie Taylor and arranged by Maestro Camelia Nine, include music from opera, vaudeville, cabaret and modern throwbacks, like Tom Waits and AC/DC.
"Will Kill For Vaudeville" runs once monthly, February through April, with guest artists. The group's second show, "The Carnie's Confession," a Dust Bowl opera melodrama, opens in May and runs monthly through July.

ABOUT "WILL KILL FOR VAUDEVILLE"
"Will Kill" is a dark comic elegy for vaudeville, filtered through the demented perspective of aging former child star Ethel Million (soprano Elizabeth D. Bacon).
The show includes music by forgotten vaudeville greats like Victor Herbert, A. Baldwin Sloane and Albert von Tilzer, soaring arias and ensembles from French lyric opera, and a bit of AC/DC, for flavoring.

ABOUT OTO
Small and alternative, Opera Theater Oregon delivers showy, entertaining performances of opera in English, as well as original musical and cabaret productions. Our goal is to produce innovative and accessible shows, preserving the beauty of the music while playing shamelessly with format, and offering affordable ticket prices. We're also committed to using local talent and non-traditional orchestration.

The Cuban Missle Tango In his last production Apis, or the Taste of Honey, Jerry Mouawad crossed the world of the honeybee with that of a military prison. In The Cuban Missile Tango Mouawad crosses a halloween night dinner party with the Cuban missile crisis. Call it fusion theatre, call it explosive dance mime performance, call it opera beyond words – whatever you call it, it’s still difficult to peg. The Cuban Missile Tango plays Aug 27, 28, 29 @ 7:30, and Aug 30 @ 2:00. All ticket are $10. Shows will take place at Imago Theatre, 17 SE 8th Avenue. Tickets are only sold at the door one hour before show time. For more information visit:www.imagotheatre.com
The Cuban missile crisis took the world dangerously close to a nuclear disaster. Robert McNamara ironically called the politician’s responsible - rational men. The rational men were Khrushchev, Kennedy and Castro. Each became victims of a game of chicken that threatened the annihilation of all nations. A Google search can give you the basics of the thirteen days of terror in October 1962. Those who were old enough to remember can tell you what they were doing when Kennedy’s televised speech shocked the country into fears of World War III. It wasn’t until an international conference in Cuba in 2002 that the world understood how close we came to a nuclear holocasut.
Mouawad’s cast of fourteen actors, dancers and movers throw plates, toss guns, play sex games and eat dinner to create The Cuban Missile Tango. To tell the story, teletype projections blast away above the set: Early in the play the
type reads "Fidel Castro overthrows brutal dictator to liberate Cuba. ….Castro dumps on capitalist ideology…. CIA attempt assassinations with with LCD laced cigars…." Below these headlines Mouawad stages a cantankerous celebration that turns sour then deadly. The action is both literal and abstract.
Mouawad says, "I’m into my third week of rehearsal and we open in three weeks, so everything is as crazy as the crisis. I’m trying to piece together two different events to become one. The historical data on one side of my brain, and the events of this strange party at the other. It’s tricky and complex,however what I’m after is simplicity." Not unlike Apis, Mouawad will design lights and set and incorporate the design elements into his second of what he is considering a canon of movement plays without words.
Another headline in The Cuban Missile Tango
" 1961, American Nuclear War Head: 6,312; Soviet Nuclear War heads: 401"What does Mouawad do with this data? He serves the Kennedys a horde of hors D’oeuvre, while across the room Khrushchev’s clan is served very small portions.
We asked the director one more question: And is there tango? His response: "Ah, yes, with guns in hand."
For more info: jerry@imagotheatre.com
Photos available upon request.This show rated ‘R’ for sexual and violent content